About Jewish-Catholic Relations and the Archdiocese of Chicago 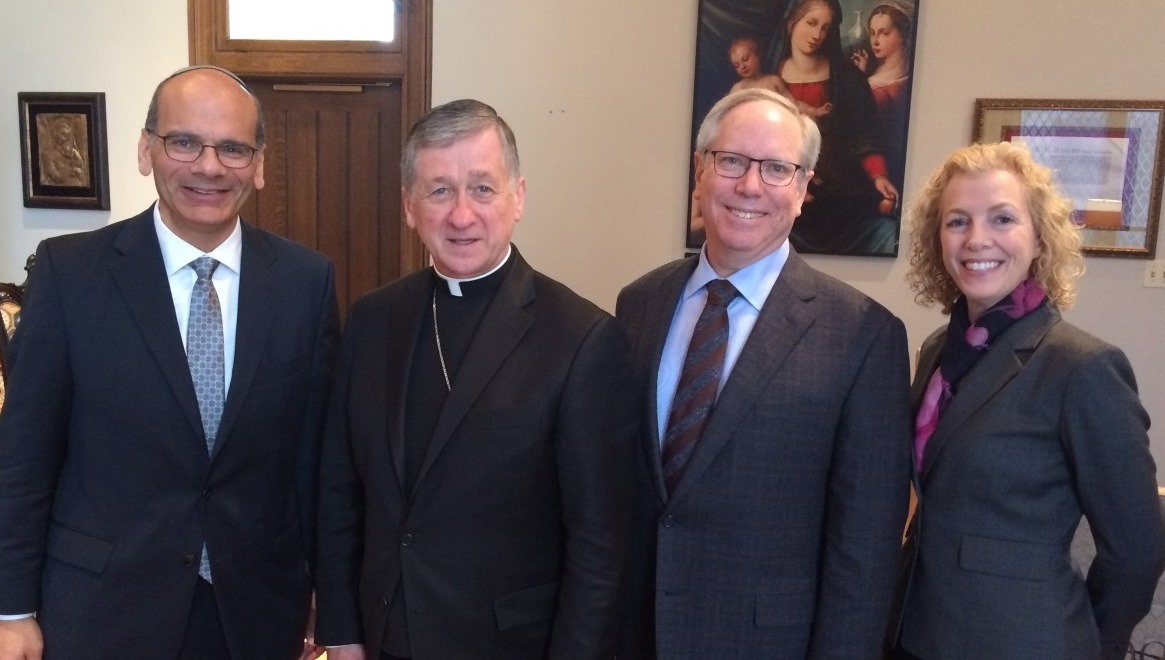 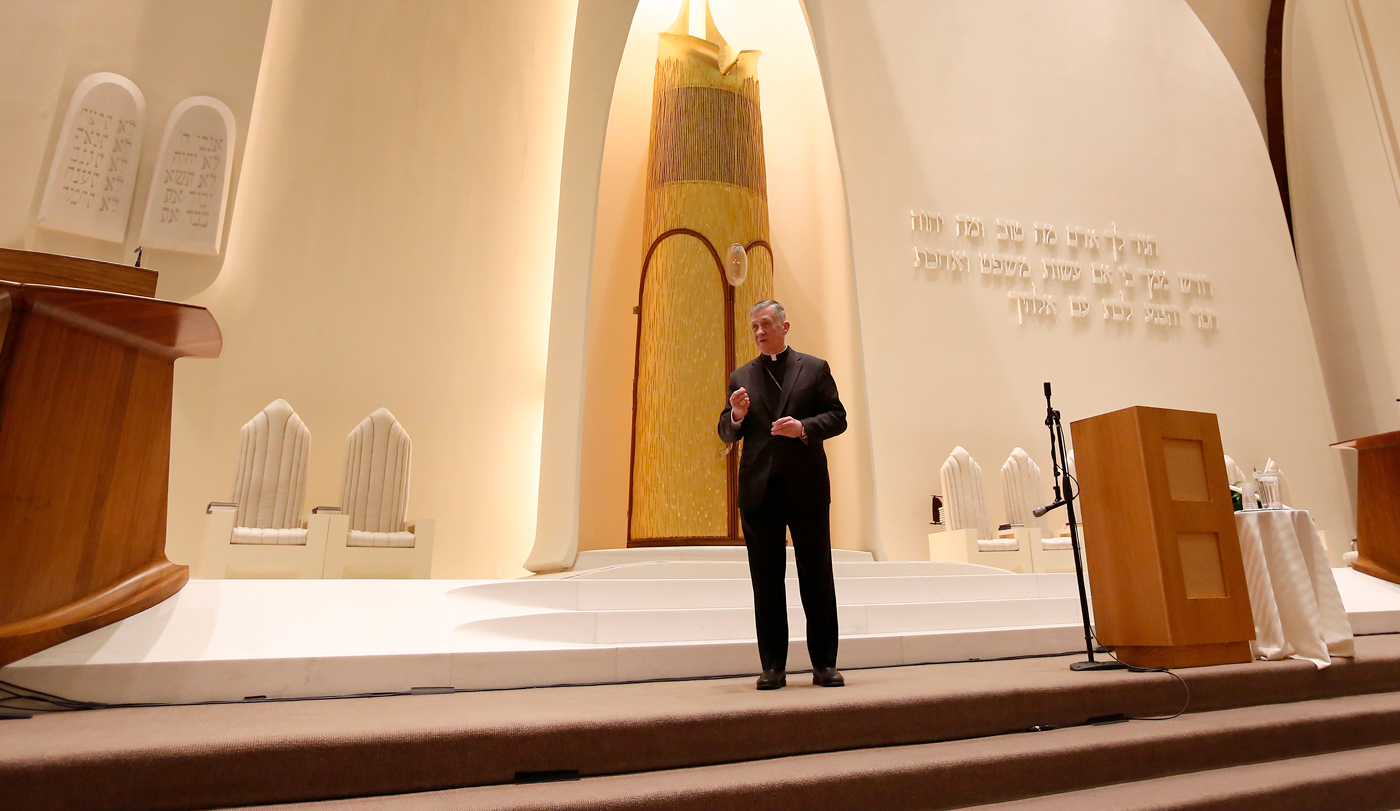 At the Second Vatican Council in 1965, the Declaration Nostra Aetate (“In Our Time”) called for Catholics and Jews to collaborate in “biblical and theological inquiry … and friendly discussions.” The Archdiocese of Chicago takes this declaration seriously and is committed to continuing to understand and work with the vibrant Jewish culture in the Chicagoland area through a variety of initiatives. A few of our engagements and programs include:

Annual Joseph Cardinal Bernardin Jerusalem Lecture
The Joseph Cardinal Bernardin Jerusalem Lecture continues and enriches the relationship between Jews and Catholics with an annual lecture on the theological issues affecting their communities. Each year’s lecture alternates between a Jewish/Catholic speaker and location. The Archdiocese of Chicago co-sponsors the event with AJC Chicago, Anti-Defamation League, Catholic Theological Union, Chicago Board of Rabbis, DePaul University, Jewish Federation of Metropolitan Chicago and Spertus Institute for Jewish Learning and Leadership.

The Bernardin-Jerusalem Lecture series commemorates Joseph Cardinal Bernardin’s voyage to Israel, the West Bank and Gaza, accompanied by local Catholic and Jewish leaders. On March 23, 1995, Cardinal Bernardin delivered a lecture entitled “Anti-Semitism: The Historical Legacy and the Continuing Challenge for Christians,” in the Senate Hall at Hebrew University of Jerusalem. The lecture was the centerpiece of his visit to Israel. Upon returning to the United States, Cardinal Bernardin established an annual lecture to continue the high level of conversation between Chicago’s Jewish and Catholic communities around the theological issues affecting their relationship.

Click here for a video recording of the entire 2021 Joseph Cardinal Bernardin Jerusalem Lecture Program, including opening remarks, the lecture of His Beatitude, Pierbattista Pizzaballa, OFM, Latin Patriarch of Jerusalem and the Q&A session which followed.

Note: The written text of the Patriarch’s lecture does not include the full program and differs slightly from the video recording.  Portions of the written version were summarized during the live program in the interest of time.  His Beatitude Pizzaballa’s additional comments related to the violent conflicts happening in and around Jerusalem at the time of the live webinar are only found in the video recording.

About
Understanding the diverse realities of Catholic-Jewish relations in the Western world and the Middle East is essential to meet the present challenges and opportunities for dialogue.  Patriarch Pizzaballa will examine the unique questions and common commitments that ground each context, while inviting us to broaden Catholic-Jewish dialogue to other geographical, cultural, and religious contexts.

Cardinal Blase J. Cupich, archbishop of Chicago, together with a delegation of Jewish and Catholic leaders from Chicago, will reschedule their planned visit to Jerusalem where the Cardinal had been invited to deliver the 25th Annual Joseph Cardinal Bernardin Jerusalem Lecture at Hebrew University on March 16, 2020.

In light of developing concern over the spread of the coronavirus, the State of Israel imposed travel restrictions on persons entering the country from Italy.  These restrictions affect some members of the Jewish-Catholic Dialogue Visit, making it impossible for all delegation members to make the trip together as planned.  As a result, and upon the recommendation of the sponsoring organizations, Cardinal Cupich has decided that this important Dialogue Visit will be rescheduled for a future date.

Jewish-Catholic Scholars Dialogue Group
This is an ongoing dialogue jointly sponsored by the Archdiocese with the Chicago Board of Rabbis and the Jewish Federation of Metropolitan Chicago. The group explores theological topics to increase understanding of religious beliefs between Catholics and Jews.

A Binding Commitment
This is a program sponsored by the Anti-Defamation League and the Archdiocesan Office for Catholic Schools and the EIA office. It is a two-day program offered to Catholic school teachers to explore the relationship between the Catholic Church and the Jewish People. The program includes historical and theological learning, a Shabbat service, a Shabbat dinner with holocaust survivors and an excellent Holocaust curriculum, Echoes and Reflections, developed by the ADL.

Modern Israel: Holy Land and Jewish State
This is a joint project of the Archdiocese of Chicago and the Jewish Community Relations Council of the Chicago Jewish Federation. In this project, which has included a trip to Israel, Catholic educators explore the complexities of this place and build lesson plans for their own teaching across several disciplines (social studies, religion, science, etc.).